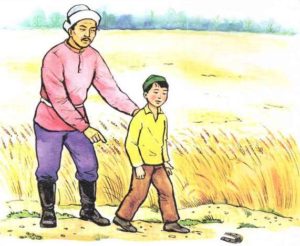 One man was coming home from the field together with his ten year old son. Father noticed a horseshoe that somebody had lost on the road and told his son, “Take up this horseshoe.”

“Why would I need this old useless horseshoe?” asked the boy.

The father said nothing; he just took the horseshoe himself and they both went on.

When they reached the outskirts of the city, where forgers usually worked, father sold that horseshoe for three kopecks.

After some time, they met merchants who traded cherries. For three kopecks he got for a horseshoe, father has bought a lot of cherries. He wrapped them in kerchief and continued his way. He didn’t look at his son and ate some little cherry from time to time. The son was going behind him and looked on those cherries with great envy. Suddenly, father drooped one cherry, the son took it up and ate.

After some time the father has dropped another cherry, then again and again. Then he was dropping cherries along whole their way.

Son leaned, picked up cherries his father dropped and ate them. He did so for ten times at least. Finally, the father stopped. He gave his son the kerchief with cherries and said, “You see, because you didn’t want to lean for one time and pick up the horseshoe, you had to lean for ten times top pick up the cherries that were bought for money from that horseshoe. Remember this, my son, if some day you consider an easy work to be too hard for you, you will certainly meet work even harder. If you are not satisfied with small things, you’ll never get things much greater.”